Back
Find a retailer 觀看產品視頻
DISCOVER IN ONLINE BOUTIQUE 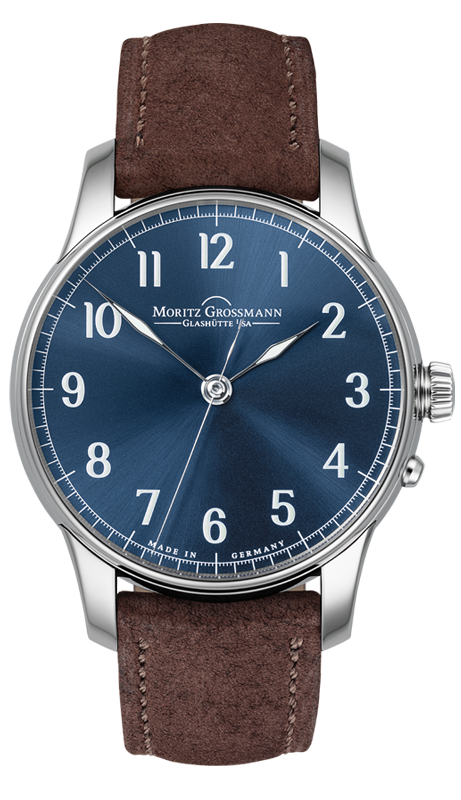 shines during the day, lights up at night

While conventionally the small second hand is placed in the six o’clock position in the bottom third of the dial on Grossmann watches, here a large-scale second hand is positioned in the centre of the highly refined dial.
CENTRAL SECOND combines a case made from polished steel with a charmingly elegant feel and superb functionality.

The Grossmann manual winder with pusher

A striking contrast to this is provided by the numerals in a rich white and the polished steel hands in white. Filled with HyCeram Luminex, they also make it easy for the wearer to read the time, even in the dark. This hybrid ceramic comprises powerful luminescent pigments that glow in the dark intensively, are long-lasting and produce a beautifully bright green colour.

The second version of CENTRAL SECOND comprises a salmon-coloured dial and is limited to 25 watches worldwide.

The manually crafted hands made from steel blued over an open flame form a wonderfully sophisticated contrast to the dial in a salmon hue. With the Moritz Grossmann logo and Made in Germany inscription in black letters, the blue hands and numerals form a harmonious ensemble. All of these elements combined underline the watch’s air of classic understatement.

The Grossmann manual winder with pusher

The in-house developed manual winding mechanism with pusher contains a perfected hand setting mechanism, which eliminates two potential problem areas: avoiding the ingress of foreign particles during the adjustment process and altering the hands unintentionally when pushing the crown back into place.

After a short pull on the winding crown, the mechanism switches to hand setting and simultaneously stops the movement. The crown immediately returns to its original position, allowing the hands to be adjusted precisely. The movement is then restarted using the pusher below the winding crown without having to move the crown again. At the same time, the mechanism is reset to winding mode.

Discover everything about the heart of the CENTRAL SECOND.

You have questions about